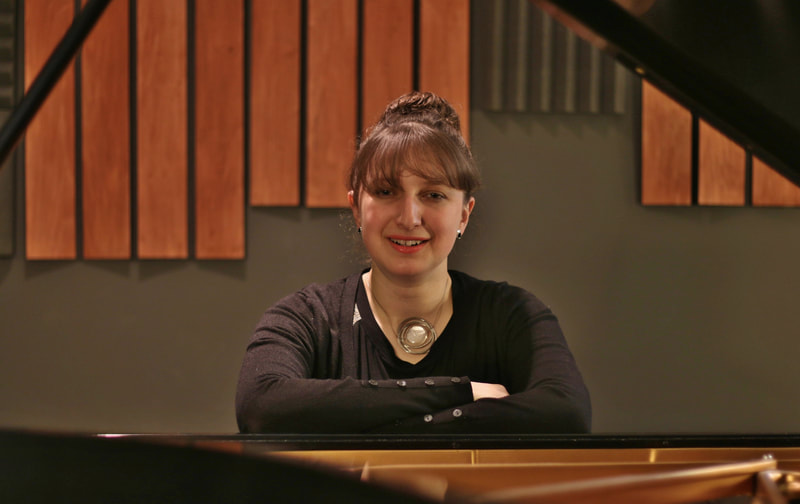 Rachel Kreyner
​Piano
Rachel Kreyner is a versatile collaborative pianist and piano teacher with over a decade of experience teaching and accompanying. She has worked for children's musical-theatre and ballet schools, as well as Alberta choir/instrumental ensembles. At the University of Calgary, she was part of several ensembles including the Klezmer ensemble and Orchestra, led by Edmond Agopian. Currently, she is the Collaborative Pianist for Associate and intermediate Strings (cello) at the Calgary Mount Royal University Conservatory. She accompanies for weekly masterclasses, with renowned cellists Beth Root Sandvoss, David Morrissey and notable guest artists including Cameron Crozman, and John Kadz.
As a member of the Bow Trio (with violinist Theresa Lane, and cellist Jacinta Green), Rachel collaborated in developing and presenting musical outreach for Calgary Elementary schools. Through the support of the National Arts Centre's Music Alive Program, the trio had the privilege of developing and presenting musical outreach under the direction of Samantha Whelan Kotkas. In 2018-2019, the Bow Trio presented a concert program and workshop to Calgary-area schools, as well as the CUPS kindergarten-a non-profit organization which helps children facing poverty and trauma.
In the summer of 2018, Rachel was a collaborative pianist on staff at the Opera Viva! Music program in Verona, Italy-working directly with opera recitative expert Joyce Townsend, alongside many other well-respected American performers. These included conductor Kirk Severtson, tenor Henry Price and stage director Robert DeSimone. In 2017 Rachel completed her Master's in Piano Performance at the University of Calgary with Charles Foreman, and studying jazz with Sheldon Zandboer. She is also the holder of a Performer's ARCT from the Royal Conservatory of Music and a combined Bachelor of Music (performance) / English Honors degree from the University of Calgary.
At the University of Calgary, she received a variety of awards, including a grant from Canada's Social Sciences and Humanities Research Council (SSHRC). Rachel yearly assists students with juries, auditions, CMC, CPAF, RCM exams and entries in the RBC concerto competition. She has performed in masterclasses held by the Honens and Pro Musica societies, as well as premiering new works for composers in the 'Happening' concert series. In 2013 she studied with renowned personalities Rudolph Jansen and Anton Kuerti in the Mountainview Chamber Music Festival, and in 2015 her chamber group received one-on-one coaching with Canadian composer Ana Sokolovic. Various Canadian teachers shaped her piano technique, most notably: Marilyn Engle, Ann Davidson and Irena Ginzburg. Rachel’s teaching philosophy emphasizes balance between sight-based and sound-based methods of learning music, and tailoring lessons to the specific abilities and interests of her students.